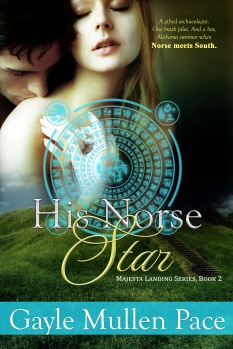 I’m so excited! His Norse Star is available on more online retail outlets – Amazon and Barnes & Noble have joined Smashwords just in time for Christmas. EBooks make great last minute gifts for the romance lover in your life.

The Majesta Landing Series is about three brothers. Pictures for Maddie (Book 1) told Kody’s story. Book 2, His Norse Star, tells Tec’s story. The elusive middle brother’s story has yet to be written.

Tec Raines loves life. And flying. He owns his own charter business and enjoys life as a bachelor. He has everything he wants in life, and anything he doesn’t have, he can get. Including women.

Then, the beautiful Dr. Mairenn Vestergaard walks into his life. Driven by her career as an archaeologist, she’s searching for the find of a lifetime, the one artifact that will rival some of the world’s most important discoveries. She doesn’t have time for a love life. Until she meets Tec Raines.

Together, they explore the world of the Norse, the Mississippi Mound Builders, pioneer America–and cheesecake! It’s smokin’ hot romance! Join them on their journey. Here’s an . . .

“A beautiful woman should always have men falling at her feet.”

“I think men prefer having beautiful women falling at their feet.”

“So cynical. What can we do to change that?” He slowly lifted the edge of her glove to press his lips to her wrist. Watching her through narrowed eyes, he drew off the glove, kissing his way from wrist to fingertip, his teeth catching the small pads at the base of her fingers. “A woman should hear how lovely she is.”

Her throat closed as the heat of his breath teased the sensitive nerves in her skin. She shivered despite the sun’s warmth, his caress sending delicate arcs of pleasure through her body. He traced the center line of her index finger, gently biting the tip. The rush of her exhale was the gasp of wanting more, and he didn’t disappoint.

The second glove met the same fate as the first—slowly, with exquisite care as he made a torturous route, tugging the tip of each finger and exposing her skin by the millimeter. He nibbled the thin sheath of skin between her thumb and index finger before turning her hand to kiss each knuckle, following each finger to the tip.

“Only if it’s true,” he said, leaning toward her.

He was one breath from kissing her. “Handsome.”

Her heart jumped into her throat. “That you’re handsome?”

As his lips touched hers softly, one rushed, barely audible word escaped her. “Oh.” How long had it been since she’d been kissed, since any man had called her lovely? Too long, her mind whispered. She inhaled the scents of aftershave and musk lingering on his skin, her hand creeping around his neck.

“You taste like coffee,” he whispered, sipping her lower lip.

3 thoughts on “His Norse Star Is Now Available at Amazon and Barnes & Noble!”