I love archaeology and the possibility of unraveling the secrets of the past! When I wrote His Norse Star, it was with a deep seated belief that new Norse sites would one day be found. And one may have been!

Though hesitant to declare it a Norse site, archaeologist Sarah Parcak does admit the site shows promise. Her work with satellite imagery led to the find and the preliminary work that followed. Read about her team’s exciting discovery here.

Was it necessary for Mairenn Vestergaard to even be an archaeologist? That’s a good question. As authors, we have the privilege of playing God with our characters, to make them live or die, to fall in love or to never find it, to succeed or fail. We create the broader landscape and populate it with people who have a story to tell. And while we type, we hope they tell it well.

I thought I’d share with you how I found Dr. Mairenn Vestergaard.

A couple of years ago, I read an article about a Native American site two hours south of where I live. An incoming business had been given permission to use the mound for fill dirt. There was public and academic outcry over the destruction and loss of such a valuable and irreplaceable site. The last update I saw was dated 2013.

And another story. Later, I read an article about Native American mounds that had graced the landscape near Bessemer, Alabama. They were 400 years older than the more famous mounds at Moundville. Over the years, treasure hunters had left their mark, and numerous excavations beginning in 1890 yielded many artifacts, but destroyed the mounds. A large portion of the Indian village has, in recent years, been developed over.

Then I learned that here in Alabama, when Native American sites are on private land, the landowner can pretty much do whatever he wants. However, the state hopes that the owner will seek advice from archaeology experts in order to preserve and protect the site for future generations.

I also watched a documentary about the Viking explorers, their travels in Europe and west to Canada, settling for a time at a place that has become known as L’Anse aux Meadows. What intrigued me was the mention of butternut tree seeds discovered there. The tree isn’t native to Canada and that suggests that the explorers sailed south, at least to the Gulf of St. Lawrence area.

So, all the information jelled and Mairenn Vestergaard was born–an idea with a few sentences. She was the right heroine for His Norse Star. I know–she’s not real, she’s just a fictional character, but I’ve known her all her life. She’s smart. Well-educated. Steeped in Norse culture. Loves Turkish style coffee and Bubble and Squeak. But she’s far from perfect, although she’s perfect for Tec Raines. She has insecurities, too. And fears. Just like all of us.

Her role in the story began with a what if? What if the land the Raines brothers inherited contained a previously unknown Native American site? What if artifacts had been stolen, including several that shouldn’t logically be there? What if those illogical items were tied to the Norse who settled L’Anse aux Meadows? And a final consideration – what if the Raines brothers were considering selling the land to developers?

Did the Norse explorers travel farther south than the area where they found the butternut tree seeds? I’ll leave that to the experts. Maybe they didn’t, but I like to think they did. Perhaps not as far south, perhaps not to Alabama, but somewhere.

Finally, to answer my first question – yes, Mairenn Vestergaard had to be an archaeologist. There was no other way for the story to go. She had to be the one to find the glass bead that started the ball rolling.

I’m so excited! His Norse Star is available on more online retail outlets – Amazon and Barnes & Noble have joined Smashwords just in time for Christmas. EBooks make great last minute gifts for the romance lover in your life.

The Majesta Landing Series is about three brothers. Pictures for Maddie (Book 1) told Kody’s story. Book 2, His Norse Star, tells Tec’s story. The elusive middle brother’s story has yet to be written.

Tec Raines loves life. And flying. He owns his own charter business and enjoys life as a bachelor. He has everything he wants in life, and anything he doesn’t have, he can get. Including women.

Then, the beautiful Dr. Mairenn Vestergaard walks into his life. Driven by her career as an archaeologist, she’s searching for the find of a lifetime, the one artifact that will rival some of the world’s most important discoveries. She doesn’t have time for a love life. Until she meets Tec Raines.

Together, they explore the world of the Norse, the Mississippi Mound Builders, pioneer America–and cheesecake! It’s smokin’ hot romance! Join them on their journey. Here’s an . . .

“A beautiful woman should always have men falling at her feet.”

“I think men prefer having beautiful women falling at their feet.”

“So cynical. What can we do to change that?” He slowly lifted the edge of her glove to press his lips to her wrist. Watching her through narrowed eyes, he drew off the glove, kissing his way from wrist to fingertip, his teeth catching the small pads at the base of her fingers. “A woman should hear how lovely she is.”

Her throat closed as the heat of his breath teased the sensitive nerves in her skin. She shivered despite the sun’s warmth, his caress sending delicate arcs of pleasure through her body. He traced the center line of her index finger, gently biting the tip. The rush of her exhale was the gasp of wanting more, and he didn’t disappoint.

The second glove met the same fate as the first—slowly, with exquisite care as he made a torturous route, tugging the tip of each finger and exposing her skin by the millimeter. He nibbled the thin sheath of skin between her thumb and index finger before turning her hand to kiss each knuckle, following each finger to the tip.

“Only if it’s true,” he said, leaning toward her.

He was one breath from kissing her. “Handsome.”

Her heart jumped into her throat. “That you’re handsome?”

As his lips touched hers softly, one rushed, barely audible word escaped her. “Oh.” How long had it been since she’d been kissed, since any man had called her lovely? Too long, her mind whispered. She inhaled the scents of aftershave and musk lingering on his skin, her hand creeping around his neck.

“You taste like coffee,” he whispered, sipping her lower lip.

Just one day to go! The cover is beautiful and tells the story in one image! But before then, here’s one last teaser. 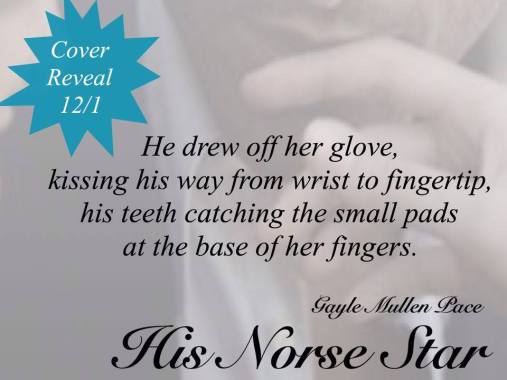